We had 16 second year Brownies coming to visit, so we decided they should come on the day we planned to do the chocolate challenge!

6:45-7:00--We did Horseshoe and let the Brownies watch. Normally, I'd let them take part, but we barely have enough space for our 24 girls to march into formation, without adding another 16! Once the horseshoe was formed, the Brownies came up and joined us and we discussed the Guide program a little bit. 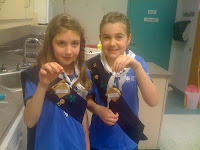 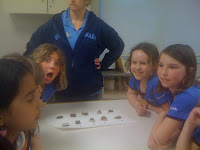 Station #2: Kim's game with chocolate bars. Our Guider did a great job finding 10 chocolate bars that were peanut free! I could guess 8 out of 10 correctly. After each group guessed, they got to sample one piece each. (Nut free bars we used: KitKat, Skor, Coffee Crisp, Twix, Big Turk, Cookies n Cream, Aero, Bounty, Mars) 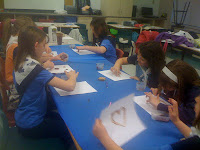 Station #3: Pudding Painting. They helped shake up the pudding, and then they each got about 2 T of pudding to finger paint with and then they could eat what was leftover. They were also responsible for cleaning out the dishes for the next group. 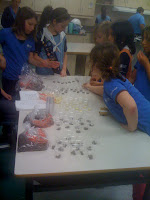 Station #4: Chocolate taste testing.  They got little shot glasses full of different types of chocolate chips--milk, semi-sweet, white, bitter--and then decided which one they liked best. 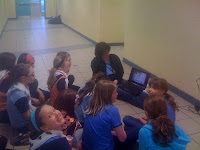 Station #5: History of chocolate. We found a video on the making and production of chocolate. I think they started watching the video partway through. Chocolate video (YouTube)


8:00-8:25--We divided them into 8 groups and then split into 2 groups of 4 groups. We gave them topics to create skits. They are also so imaginative!

8:25-8:30--Closing. We gave out the Chocolate Crests and thanked the Brownies for coming. After a night like that, how can they not want to come to Guides next year?!
Posted by Cat at 6:18 PM

Email ThisBlogThis!Share to TwitterShare to FacebookShare to Pinterest
Labels: challenges