We couldn't get a camp booked for the fall, so instead we rented a fire hall so we could have a sleepover. We chose the Olympia Badge from the WAGGGS website, since we had some Bronze level ones leftover from a few years ago.

7:30-8:00: Orientation and Rules: We had twelve girls. To split them up into their groups in the following manner--first, they got into six groups of two and then two groups of six. Then they got into four groups of three and they were all very pleased with themselves until we counted each group off--1, 2, 3--and all the 1s were a group, etc. Surprisingly, there wasn't much grumbling, even though they didn't get to choose who was in their groups.

8:00-8:45: Make up your country. Design a flag and nametags. Create an anthem.--We gave them large pieces of paper and they could make up their country name and design their flag and make up an anthem or cheer. They also made their nametags to go with their countries. They also had to choose a flag bearer and a torch runner.

8:45-9:00: Opening Ceremonies: We had them parade in and do a horseshoe formation, while we played the Olympic Hymn. Then the torch bearers fell out and ran the torch  around the room and up the middle. Each country did their anthem/cheer, and then we had one girl read the Olympic Athlete Oath and a Guider read the Olympic Judge Oath.

7:00-8:00: Dressed and packed up--since we were sleeping in our play area, they had to get their sleeping bags and gear packed up and stowed in the corner before breakfast.

8:00-8:30: Breakfast--Our quartermaster always treats us well! She made Cinnamon French Toast Bake and Monkey Bread Minis, along with oranges and kiwi slices and juice.

8:30-9:00: Tangrams activity--One of the activities in the challenge was to create an Olympic figure out of a tangram puzzle. Then we had them switch tables and they had to race to recreate another team's tangram without talking. (YaO2#2)

9:00-9:15: Food Pyramid activity--the next challenge activity was to compare the Asian Food pyramid to a Western Food pyramid. The first team to find 5 differences won. It was interesting, because their differences weren't what we were expecting, but they were all valid differences!

9:15-10:45: Olympic Games--Now we got into the active games:
Hopscotch--we used green painter's tape to make three small hopscotch's on the floor (1-4, plus a home at the top). Each girl had to do each number.
Leap Frog--they did these as  a race--lots of fun to watch!
Skipping Relay--they had to each skip forwards and backwards twice up the course. When the teams finished, they had to all sit down before they could earn their placement.
Balloon Pop Hop--We tied balloons to their legs with string, marked out a square with pylons, and they had to pop the other countries' balloons. The last balloons not popped won. One girl didn't like the sound of the balloons popping, but this was a fun game all around.
Three-legged race
Wheelbarrow race--they had to switch at the turnaround so everyone got a chance to be the wheelbarrow.
Musical Chairs
Hula hooping--We timed each girl from each team and the aggregate time was what we used for each country.

11:00-11:15: Closing Ceremonies--They paraded into horseshoe formation and ran the torch out of the stadium. Then we awarded them gold, silver and bronze "medals"--we found jingle bells at Michael's that were gold, silver, and bronze and we put them on ribbons. The girls loved them!

11:15-12:00 Create commemorative coins and make up a sport--The last challenge activity. Everyone made a commemorative coin out of shrinky dinks and they all turned out fantastic. Then we laid out an assortment of sports equipment--balls, skipping ropes, hula hoops, pylons, paddles, inflatable bat--and had them each invent a game to play.

1:00-1:30: Lunch--Ham and cheese croissants, heated in an oven, with veggies and dip, and two-bite brownies for dessert.

1:30-2:00: Guides Own--We did our Two Apples and an Onion, read an Olympic Poem, sang Aka Taka Nuva (this is the closest version I found to the one I know), and handed out their crests.

The girls all went home with smiles on their faces and everyone seemed to have a wonderful time! 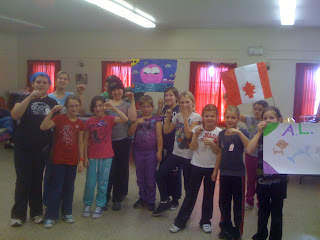 Email ThisBlogThis!Share to TwitterShare to FacebookShare to Pinterest
Labels: challenges, you and others