We found out that we didn't have the school for this night, which was supposed to be our Remembrance Day meeting. We'll have to do Remembrance Day next week, after the fact. But one of our Guiders stepped up and booked the fire station for us.

We sent them the requirements for the badge before we got there, but the fire fighter who had planned to lead the session wasn't going to be there, so when I arrived first, they had just found out we were coming! But I gave them my book and they did an awesome job! 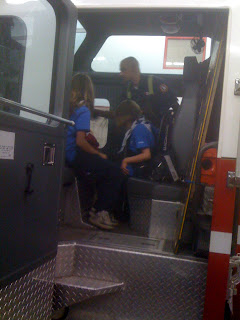 We started upstairs in a classroom where the two fire fighters who were leading discussed most of the aspects of the badge that they needed to learn. They spent about an hour going over the badge requirements, interrupted numerous times by questions! We have a couple of girls who, I swear, had their hands raised almost the whole time. As soon as a question was answered, they raised their hands to ask another.

(Funny side note--before we started, I told them to make sure they had questions and no stories. A few minutes in, one girl raised her hand and started to tell a story. Before the leaders could say anything, the girls sitting behind her gave her a little poke and said, "That's a story." Hee!)

Then we went down to the station bay where the trucks are. The fire fighters put on their gear and masks, then they turned out the lights and got down to crawl around, to show the girls what they would look like if they were in a fire and coming to rescue them. It is a strange sight and a good thing for girls to see if they were ever in a bad situation. 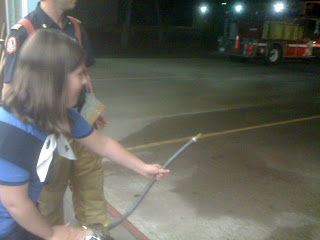 Finally, they got to go on the trucks. They went in five at a time and I don't know what he was telling them, but he explained a bunch of things about the truck. When they came out, they had water fire extinguishers set up and the girls got to try to spray the extinguishers, which they really enjoyed.

We had an activity planned, in case they finished early, but the fire fighters really seemed to enjoy talking to the girls and telling them all about what they do, that they used the whole 2 hours!
Posted by Cat at 6:45 PM

Email ThisBlogThis!Share to TwitterShare to FacebookShare to Pinterest
Labels: badges, outings, safety, you and others