Meeting #7: Volunteering at the Food Bank

We couldn't have the school for our meeting tonight so it was a perfect night to go to the food bank. Every day they get more leftover bread from the grocery stores than they can use so our job was to dump the old stuff. And the girls had a blast! We dumped 115 bread flats in about an hour. 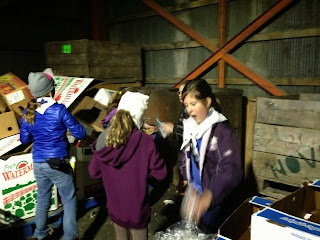 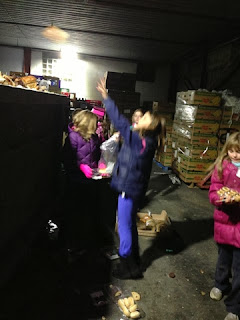 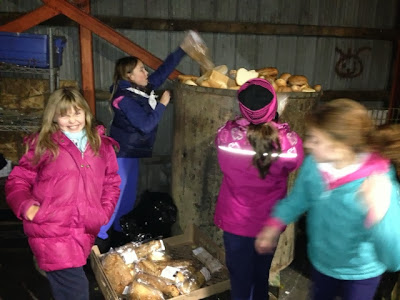 We ran out of dumpster space and we had some time before the parents came so I taught them a game I learned at conference.

What Are You Doing?--the girls line up in two single file lines, with the girls at the head of each line facing each other. One girl starts doing an action, say tying her shoe the other girl asks, "What are you doing?"  The first girl names an action she isn't doing, say eating an ice cream cone. The second girl starts doing that action while the first girl goes to the end of her line. Then they just keep doing this.

I thought they'd ask to stop, but they seemed to really like it and played for about 20 minutes. It was a great leaving (or coming) game because the number of girls didn't affect game play. They could pop in and out line easily!
Posted by Cat at 4:00 AM

Email ThisBlogThis!Share to TwitterShare to FacebookShare to Pinterest
Labels: games, you in guiding