7:00-7:30--Horseshoe: We talked about each activity from the Halloween party and what went well and what didn't. Each activity had some positives and negatives. We had a couple of girls who took the constructive criticism poorly, but we explained that no one did a bad job--we were just discussing what could be done differently next time to improve things. The main takeaways this year were that they would prefer a craft to a spooky story, and the spooky story wasn't very spooky.

7:30-8:00--A Sparks group meets at the same time as us down the hall. They have all new leaders (plus an experienced Junior Leader), so we offered to come teach them some Guiding songs. We spent time this meeting getting ready.

I gave the patrols the table of contents from my songbook that I've put together of songs that I know. I have them organized by campfire order, and asked them to pick 3 or 4 from each section that we could teach the Sparks. Becky's Guiding Resource has a great visual on how to organize a campfire. 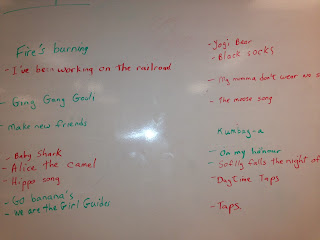 
6:30-7:30--We went straight to the Sparks meeting room. They had their opening, and then we joined them in a campfire circle. We had an indoor campfire, made from wood and Christmas lights.

We went around the circle and everyone introduced themselves and then we had some fun singing! We overplanned and had more songs than could fit in 30 minutes. We skipped the yells and chants and some of the silly songs. We finished with On My Honour and Taps.

After Taps, the Sparks group served everyone Smores. They toasted marshmallows in a toaster oven, and then put them between two chocolate chip cookies. Delicious!

7:30-8:30--We went back to our meeting room and played some games. We started with one we had prepared last year and never got around to using. It's from the Cookie Rising section under Teamwork. You put the letters of the alphabet on cards and spread them out in a defined area. Then the girls have to touch them in order and each girl has to touch at least one letter. They need to figure out how to do it on their own. They started by going in order around the circle, which resulted in girls having to reach far across the circle to touch a letter. It took them 56 seconds. Then we helped them think up ways they could improve their time. It took some effort and some prompting but eventually they figured out if they each took letters that were close to them, they could do it faster. Then we had to remind them that every girl had to touch one. We have some competitive girls, so when some girls were slower to touch their letter, others touched it for them and then not everyone touched a letter. But eventually, they all touched a letter and could do it in 23 seconds! (YaO1#2)

Then we tried another "teamwork" game, which is really hard. The girls sit in a circle and can't discuss strategy. Then they have to count, but only one girl can talk at a time. There are some that insist on always saying a number or trying to say it faster than anyone else (again, the competitive ones) and some who never said a word, waiting for others to go first. I think the highest they got to was 8. (YaO1#2)

Then we tried "What Are You Doing?" again, but it seems to work better with 10-12. With 19 girls, the ones who are waiting get too disinterested. We tried splitting them into 2 groups for it, but by then they weren't interested so we regrouped.

Since they were lined up opposite each other, we tried doing Caimarusa. We could sing the song and mostly remembered the movements, but I think we had one step missing. It was still fun though!

Email ThisBlogThis!Share to TwitterShare to FacebookShare to Pinterest
Labels: games, you and others