We're still getting used to such a big unit and how much time it takes to do things and move girls around.

(20 min) Patrol Elections: We had asked the previous week who wanted to be Patrol Leaders and Seconders. We let 2nd and 3rd Years run and we had 8 who wanted to run. We were going to have 5 Patrols and we needed 10 girls to run, so we let 1st years who had been Brownies also run.

We started  by having the girls give short speeches and it was amazing to hear what the girls had to say. Most had written down their speeches. One 1st year hadn't been at the meeting the week before and wanted to run for Seconder and she gave a great speech considering she was unprepared!

After the speeches, they each got a piece of paper and wrote down 5 names for Patrol Leader and 5 names for  Seconder and they had to be 10 different names. (YiG1#2)

(5 min) We adapted the Code of Conduct (MemberZone login) activity we did last year. We have the first five items (Respect, Safe Space, Privacy, Set an Example, and Care) written on a large piece of paper and had the girls read off the each item and we discussed what each meant. (YiG2#4)

(5 min) Reef Knots: We gave them rope that they could keep in their Patrol boxes (one for each girl) and had them practice making reef knots. (YiG1#5)

(10 min) We announced the girls who would be Patrol Leaders and they lined up along the front. Then as we announced the Seconders, they got to choose which Patrol they were with. Then we drew the remaining girls out of a hat and that's the order they chose their Patrols. It worked quite well and there weren't any complaints, which is always a good thing. (YiG1#2)

(20 min) Horseshoe Practice: Since they were already lined up, we started Horseshoe Practice. We let the new girls get their songbooks they had velcroed into their lapbooks last week. The first time through, we just sang the song while standing still. Then we had them march in place as they sang it a second time. Finally, they got to march and sing and move all at the same time! We have so many girls, they have to sing it through twice to get everyone in place--I think we'll learn the Guide Law song to sing too so they don't need to go through it twice--or maybe we'll learn the second verse to the Guide Marching Song!

(20 min)  Code of Conduct: We had the girls make up skits based on the five topics we'd discussed.  As always, some were really good, and some could be better. We have one girl who is new to Guiding and when we said we were going to do skits, we had to explain what a skit was! Being in Guiding for so many years, sometimes I forget that not everyone knows the basics of Guiding! (YiG2#4) 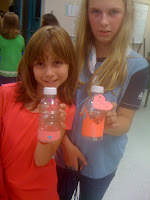 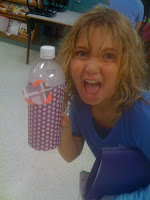 (20 min) CWFF Banks: Shift Mama issued a great challenge to her fellow Girl Guide friends to collect pennies in decorated water bottles and I thought it was a great idea! We asked the girls to bring empty bottles in, and we had extra for those that forgot (especially since we planned to do this last week and ran out of time). We touched on what CWFF is (we'll go into more depth after Christmas). The girls had lots of fun decorating and as always, some girls could have used another 30 minutes, though they all turned out nicely.

And we made it through another meeting! We still want to teach them how to make Friendship Bracelets that they can work on when they first arrive, but we still haven't found time. We're getting most of our stuff done and eventually, we'll catch up. :)

Email ThisBlogThis!Share to TwitterShare to FacebookShare to Pinterest
Labels: you in guiding