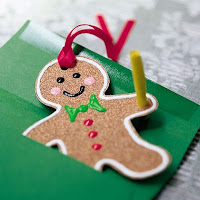 6:30-7:15: Gingerbread man craft--Last year, we decorated gingerbread men, but this year we had a Guide who doesn't eat grains, so we wanted to find something she could do. This was a really cute craft. Trace two gingerbread man on sandpaper (I pretraced them before the meeting). Rub a cinnamon stick over the sandpaper and then cut out the gingerbread man. Glue the two pieces together. Decorate with wiggle eyes, buttons, pom poms, fabric paint, rick- rack, etc. (We had glue guns for the girls to use to help the decorations stick). Then punch a hole in the head and add a ribbon to hang from the tree.

7:15-7:40 Presents--A few weeks prior, the girls asked if they could do a Secret Santa. We tried to talk to them about how it might be nice to do something for others instead--bringing food for the food bank, donating toys--but no matter how we tried to direct them, they wanted a Secret Santa. And since the program is girl-led and we gave them all their options, we went with the Secret Santa. But we added a caveat--they had make something themselves.

We didn't draw names beforehand. Everyone brought a present and set it under a small tree we had set up. Then each girl drew a number. Then we had a second draw, so it didn't matter which number the girl drew in the first place. When her number was called, the Guide got to choose a present from under the tree, but not open it. Once everyone had a present, then they all opened them at the same time.

We had a couple of girls who forgot to bring a present, so they couldn't participate in the present opening. We told the girls and sent an email to the parents in advance of the party.  It's tough, but we feel part of being a Girl Guide is learning responsibility.

7:40-8:00: Treasure hunt (Scroll way down to Social Studies section) -- We drew a map of the school area we could wander through - our room, the hallways, and the cafeteria - and marked off where we hid the foam snowmen. The snowmen treasures were hidden while the girls were working on their craft. Each patrol got a map with a spot marked for each girl. They shared the map and each girl got a turn leading their group to the next hiding spot. This was a great activity--the girls had fun and they got to practice reading a map! (Exploring badge #4)

After they found their snowmen, we let them decorate them with markers.

8:00-8:30 Food--We supplied the food for the party. Cheese, crackers, juice, and cupcakes. It's not a party without food!

And that finished out the term. We're planning to spend the month of January working on the Twinning Challenge, using it to earn the Travel badge and the Cultural Awareness badge too! A great way to lead into Thinking Day.
Posted by Cat at 7:27 AM

Email ThisBlogThis!Share to TwitterShare to FacebookShare to Pinterest
Labels: ceremonies and parties