Patrol Time: They continued working on songs for the Carnivale Song contest.

Craft: To get ready Carnivale, we made Carnivale masks! We pre-traced glasses onto fun foam. The girls cut them out and they hot-glued a chopstick onto the side to be the stick to hold them to their faces. Then we had jewels and sparklies and feathers for them to decorate them. They had a great time! (CA#1, CA#5) 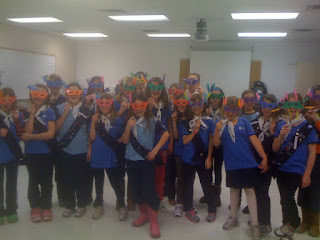 Song Contest: Next up was the song contest and they did a great job on them! They incorporated facts that they'd learned in the previous meetings and made up tunes. There were funny ones and raps and overall, I was very impressed with their creativity. (CA#1, CA#2, CA#5)

Food: Finally we had come Caribbean food to end the night.

Pumpkin Pancakes: We used the recipe from the Twinning Challenge but we had some difficulty cooking them. The batter was quite wet and they were still wet once they were cooked. But the girls ate them and the flavour was good.

Iguana soup!--This was mentioned in story we'd read, so our Cook Master whipped some up for the girls to try. She added green food colouring to chicken and made chicken noodle soup and we told them it was Iguana soup. Once they tasted it, a number of girls insisted it was chicken noodle soup, but we never told them the truth.

Sunchis: I had made these meringues (scroll down) the week before, but then we had to cancel for snow. I didn't think they'd last another week, so I took them to work for people there to eat. They were good and quite sweet and the girls would have liked them, I'm sure. Our girl who moved away had lots of foods she couldn't eat, so they would have been good for her, but since she wasn't at this meeting, I wasn't as concerned at making sure we had enough that she could try.

So now we're done with Curacao! When we told the girls, they said we hadn't flown back yet, so we may need to fly them down the hallway next week to get them back to Nova Scotia!
Posted by Cat at 3:55 PM