Since we don't have Patrols (yet), we let the girls just fill up four tables, with 6 girls at each table.

We gave them two activities to do:
1. Pick activities from the sections of the Fit for Life Challenge that they'd like to do so we can help plan how to do them.
2. Tell us 5 things that interest them. This is in preparation of our enrollment ceremony, which we are borrowing from Hollah Guiding.

We started the night by asking who wanted to be Patrol Leaders and who wanted to be Seconders. We have five 3rd years who wanted to run for PL, and we had seven 2nd years at first, but then 3 decided they didn't want to give speeches. So we ended up with 9 girls running for 8 positions, which is always sad for someone. (YiG1#2)

The girls gave great speeches--the third years were all prepared with speeches written down. We did the votes--each girl voted for 4 PL and 4 S, and had to write 8 different names down. The voting was really close and came within 1 vote for the girl who didn't get in. But she'll have another chance next year. The fifth place PL automatically became a Seconder, since it's her last year.

While the votes were being counted, we did another activity from Hollah Guiding. We made up actions for the Law. I generally got 2 or 3 suggestions (weeding out the silly ones) and then voted on each law for the favourite. Here's what we came up with. (YiG1#1)

The Guiding Law Challenges me to:
Be honest and trustworthy (make a unicorn horn with your finger, since unicorns are honest and trustworthy)
Use my resources wisely (spread arms out to show all our resources)
Respect myself and others (one hand on your heart and then sweep it around the circle)
Recognize and use my talents and abilities (dance action)
Protect our common environment (hold out hands like you're holding up the earth)
Live with courage and strength (flex one arm)
Share in the sisterhood of Guiding (make a heart shape with your hands in front of your chest)

Once we finished this, we named the PLs, and then the Seconders got to choose which PL she wanted to work with. Then we drew names and girls could pick their patrols. Once a Patrol had 6 girls, it was full and the Patrol sat down. The Patrol Leaders picked their Emblems (we have Red Roses, Forget-Me-Nots, Scarlet Tanagers, and Sparrows). 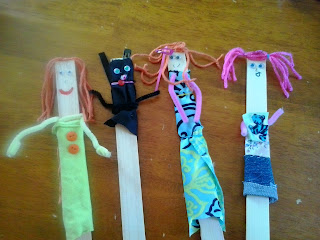 I found this idea on GuideyDiary and thought it would be nice to focus on the Law. Each Patrol picked a Law and we gave them 10 minutes to come up with their skit ideas.

Then we gave them 30 minutes to make the Paint Stick Puppets. Basically, it's a paint stick, with material to make a dress, yarn for the hair, pipecleaner for arms and then ribbons and such to decorate. They turned out really well!

Next week, we'll have time to show the skits. So we gathered in the puppets so they'd have them next week.

Then we cleaned up and had closing and handed out cookie cases!

Email ThisBlogThis!Share to TwitterShare to FacebookShare to Pinterest
Labels: you in guiding