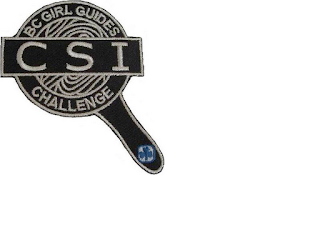 This camp was a lot of fun, and took a bit of planning! We had two units combine for the camp, so we had 27 girls and 6 leaders. One leader loves being in the kitchen on her own, so the other 5 of us were free for programming.

We do Secret Buddies every Residential Camp. Everyone, including leaders, draw names and have to do nice things for their buddy all weekend. This can be doing her dishes without her knowing or making crafts for her. This year, we put up a piece of Bristol board and called it the Buddy Board. We had post-it notes and the girls could write something nice about their buddies and post it on the board. This was a great addition and worked really well.

Along with the CSI Challenge, we were able to help the girls earn two badges, if they didn't already have them.

We had three suspects and gave them brief backstories for the girls:
Suspect 1 arrived early at camp to go for a run. She used cornstarch in her shoes to absorb odors. She has a white terrycloth towel/facecloth to wipe sweat from her face.

Suspect 2 arrived early at camp to help Quatermaster unload the groceries and get things ready in the kitchen. She used baking soda to make some muffins, and a cotton tea towel to wipe her hands.

Suspect 3 arrived early at camp. She is very safety conscious and was worried about ice in the driveway and so spread salt out before everyone arrived so no one would slip. She used a white flannel rag to wipe her hands when she was done.


Quartermaster had set up the table to have snacks when everyone arrived. Everyone was busy doing her assigned task and didn’t see anything suspicious happening. (Alternately, the suspects could all point the finger at someone.) 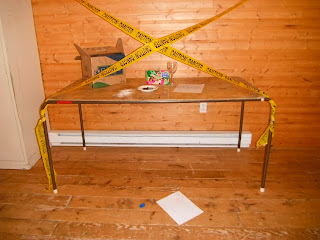 Crime Scene:
Besides the crime scene, we also posted optical illusions around the room for the girls to look at throughout the weeknd. (BW#5) (Optical Illusions, Word doc)

7:30-8:00—Orientation/Introduction—Discuss fire drill, camp rules, Leaders & First Aider, Discuss the Challenge, Draw names for secret pals. For name tags, we took the girls pictures before camp, and made ID badges that hung around their necks with ribbons.

Ice Breaker game—Who Stole the Cookies from the Cookie Jar. We had two units, so they had to call a girl's name from the opposite unit. They were all standing, and after their name was called, they sat down, so we made sure that everyone's name was called.

The girls sang this song all weekend. 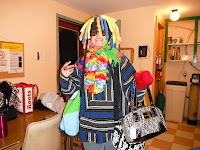 8:00—Witness game—While the Ice Breaker game was going on, Wendy went back to the kitchen and got all gussied up. We asked Wendy to come out to pass out notebooks and pencils, which were going to go into their detective kits. The girls laughed at her, but we didn't tell them anything about what we were going to do. Once Wendy left, we gave 10-15 minutes to write down everything Wendy had on. (Observation Game 3.3) 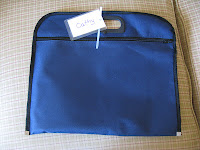 Then we assembled detectives kits. We bought them each a case from the dollar store and had them decorate their name tags that we attached to the kits. We gave them plastic gloves, cotton swabs, small plastic bags, notepads, and pencils to put in them. We had included magnifying glass, tweezers, and measuring tape on the kit list. (Arts, Crafts, Drama 4.5)

9:00-10:00 Campfire and Mug up--Mystery snack--we put crackers and cheese in brown paper bags so they couldn’t see what was inside, and gave them juice boxes to go with it. We took it all outside to eat by the fire and then sing songs.

We set the tables up for breakfast and then told them that those were there groups for the weekend. We called the groups Handwriting Analysis, Fingerprinting Unit, Lab Analysis, Hair & Fiber Unit, Footprinting.

For the morning, we set up five stations, with 30 minutes at each station. Each station taught the girls an aspect of forensics (Forensic Science Activities 5.0) and they each had a small hat craft (Arts, Crafts, Drama 4.4). 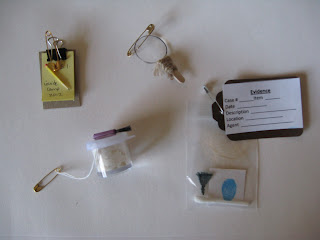 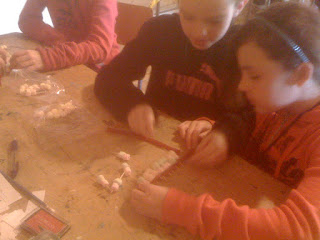 They also learned about DNA and made model DNA out of licorice and marshmallows. There is instructions for this, and I'll update the blog when I receive it from the Guider who ran this activity.

For footprints, we used pans of water and they dipped their shoes in and then put them on brown paper. (Forensic Science Activities 5.6)

We also did their bare feet so they could see their arches in their footprints. (BW#7)

Station 4 Hair and Fiber Analysis: I think they did the 5.4 Basic Analysis for this. 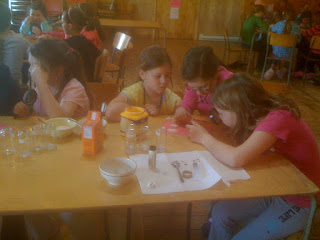 Station 5 Unknown Powders and Liquids (Forensic Science Activity 5.5): This was my station so I can give more information. For the jars, I got glass spice jars from the dollar store. I got 8, so that there would be two sets for the girls to work with. I prepared the construction paper ahead of time with the powder names on it already (I used purple and red, not black). I labelled the jars using masking tape (though it did want to come off with the many rinsings).

I had one girl write down their observations with each experiment. They were in groups of five or six, so I had two sets of papers for them to observe. When they did the jars, one group did the iodine and one group did the vinegar. (C#2) 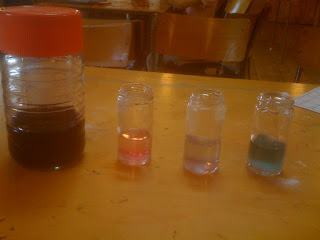 For unknown liquids, I made a pH indicator the night before camp. I chopped up purple cabbage and boiled it for 20-30 minutes. Then I drained off the liquid, which should be a dark purple and threw away the cabbage. I stored the cabbage juice in a glass jar for camp. After we did the powder, I put water in one jar, water and baking soda in one jar, and vinegar in the third. When you add the cabbage juice to water, it stays dark purple; to vinegar (an acid) it turns pink; to baking soda (a base) it turns blue/green.  The girls thought this was pretty cool! (C#5)

10:30-10:35 We took a 5 minute break to learn about heart rate. Everyone learned how to take her pulse, then we did 50 jumping jacks, and took our pulses again. It was a great break from sitting down. (BW#4)

2:00-2:10--We gave each group a secret message written in lemon juice. They could use either an iron or an iodine solution (10 drops of iodine in half a cup of water) to reveal the message that sent them outside. (C#3)

3:15-3:45—Word Search They came inside and did a Word Search (Puzzles 2.4). We took the puzzle and then put a message into the empty spaces. The supplies for their snacks were hidden in five different places around the building and each group had to figure out where their supplies were. They had some difficulties with the puzzle and if we were to do it again, we'd have to make it easier somehow.

4:00-4:30—Snack  Fondue—Girls will light their tealights with a match. Tea lights go under soup can, tin tart on top of can to melt chocolate chips, dip fruit in chocolate

4:30-5:30 Craft & Free Time: During their free time, if they wanted to complete the Bodyworks badge, they could come and see me and we would do 5 minutes talking about blood pressure. I have a blood pressure cuff that attaches to my iPhone to measure blood pressure. (BW#2) 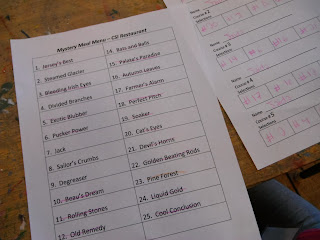 5:30-6:00 Explaining & Picking Supper Choices: Supper was a Mystery Meal. The girls were given 25 items with made up names. They didn't know what the real things were. They had to choose 5 things for each of five courses, so that they had used everything on the list.

This is where we got our sample menu: Mystery Dinner instructions. We replaced some things--Timbits instead of cupcakes, for example. The caretakers called us the day before camp to let us know that the deep freeze wasn't working, so we had to substitute Cool Whip for ice cream. We were going to have Smiles instead of baked potato, but we changed them to frozen roast potatoes.

We used paper plates, and disposable cups and utensils, to make things easier. The girls really enjoyed the whole thing, and were great sports about it.

7:00-8:00—Analyze the Crime Scene—After supper, the girls used the skills they learned at Forensic School to solve the mystery. They each had a chance to take their evidence from the crime scene and to collect evidence from the suspects. Each group only concentrated on one of the aspects of the crime.

Coincidentally, all three of our suspects had similar handwriting so they couldn't definitively figure it out from that, but the black markers we used were all different so they could easily determine it from that.

The Fingerprinting Unit had the most trouble. Fingerprinting is difficult to determine. So the girls interviewed each of us, to see if they could tell from our stories who the culprit was.

8:00-8:30—Determine the Culprit—Each group named the suspect and we arrested the criminal and found the cookies and everyone got to have a cookie.

10:00-10:30--Guide’s Own Ending--the girls revealed their secret buddies, everyone told their Apples and Onion (two things they liked about camp and one thing they didn't), sang some songs (Buddies and Pals, Say Why Say When Say Where).

Whew! It was a tiring weekend but a lot of fun! If you have any questions about it, please feel free to ask!

Email ThisBlogThis!Share to TwitterShare to FacebookShare to Pinterest
Labels: badges, beyond you, camp, challenges, science and technology