To help the girls earn their You in Guiding square, we decided to work on the Canadian Guiding badge.


6:30-7:00--Patrol Time -- Decorate a divider for your binder/folder to collect resources.  Each girl has a binder they bring to the meetings, where they can store their badge work that they do at home, or put any handouts we give them. As part of this badge, they are going to start a Resource section in their binders where they can add songs and games and crafts. For the Patrol Time, we gave them dividers (I got a pile of them that were going to be thrown out at work) and they decorated them to start their section. Materials Required: Dividers, markers

7:00-7:15: Horseshoe--At Horseshoe, we discussed what a Resource was and gave them the link to Becky's Guiding Resource. They were tasked with bringing back at least one resource to add to their binder. (CG#6)

7:15-7:45—We gave the girls facts about history of Guiding and asked them to make up a game, skit, poem. They all chose to do skits, and they came up with some really inventive ones. One group had facts about what the uniform used to look like, so they did a take off of Little Red Riding Hood, where Little Red became a Girl Guide and described her uniform to her Grannie.

Another group did a montage of a number of little facts, including one girl being a rocket, another Roberta Bondar and a third was a box of cookies. Roberta Bondar "rode" the rocket, taking the cookies with her to outer space!

The girls drew pictures to create props and costumes and did a fabulous job all around on the skits. (CG#1, YiG2#2, DY2#3)
List of Canadian facts (Word doc)

7:45-8:15--Valentine's Day craft--Since it was Valentine's Day, we thought we'd let the girls do something fun. We started with this craft idea. 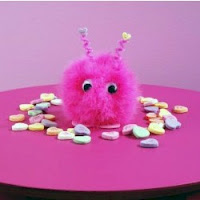 We changed it up some though, We used feather boas from the Dollar Store--one boa gave enough for 4 girls. We cut the styrofoam balls in half, so they each had half a ball to cover. And we used real candy hearts instead of stickers, because that's what we could find. The girls had a lot of fun making them and they turned out really cute.

We ended the night with heart-shaped cookies.
Posted by Cat at 9:01 AM

Email ThisBlogThis!Share to TwitterShare to FacebookShare to Pinterest
Labels: adventures in guiding, badges, ceremonies and parties, discovering you, you in guiding